I’m pretty sure there’s no time in my life when I would’ve looked ahead and predicted I’d be writing an article with this title. To be fair, I slightly embellished the title for dramatic effect. Did I hook you in? lol.

While I was working on the sculptures, I thought to myself: “Dave, this is where you’re at in life; you’re making a pair of humping turkeys. I had such high hopes for you” Ha Ha Ha. Stay in school and pay attention so you don’t end up making humping turkeys for a living. Remember, I’m not a role model; I’m a warning. 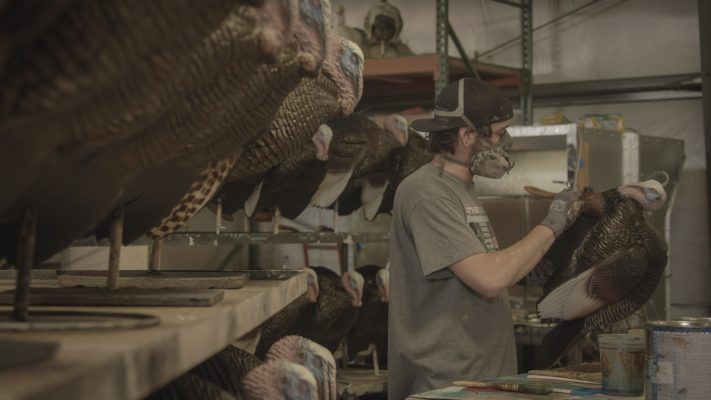 All joking aside, the sculptures were fun- they’re always fun! All of us were just so giddy about how exciting this pair is going to be to hunt with, and then we got to rig a motion system- that’s something we don’t normally get to do.

So many of us have had little punk Jakes come in to our decoy spread, muster up the confidence to mount the submissive hen (you try to look away, but you can’t), and that whole scenario saves the day as a huge Tom or sibling group of Toms charges in to take the Jake to task. In nature, the pose, shape, and motion is instantly recognizable by other turkeys, and from great distances. Now we can replicate this scenario anytime we want while hunting. Is this gonna be even fair? Of course it’s not going to be magic, but what a confidence booster and how much fun when a Tom loses his mind and comes to deal with the situation.

It’s spring time, mating season, and a distinct hierarchy has been worked-out, determining who gets to do the breeding, and who gets to be the sicko to hang around and watch (I’m talking about the birds). Now here’s a little

nce” on a hen, waiting for her to raise her tail. Why is this important? In human terms, it means there’s still a chance for you- all is not lost. It’s not finding someone in bed with your girlfriend necessarily, it’s more like, finding a scrawny little tween forcing himself on your girlfriend. You’re Tim Silvia, and the other guy is the dude from Twilight with the white face and big hair. It’s guaranteed to go down! 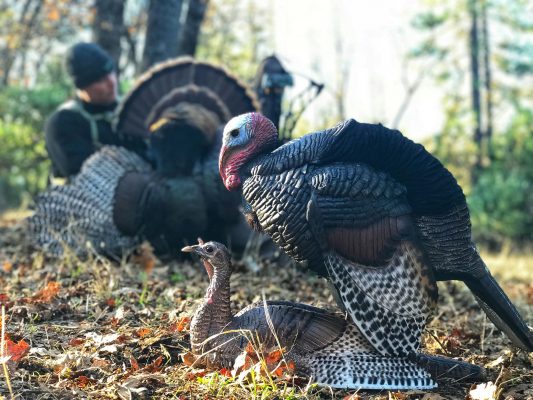 We had all seen the mating jake scenario happen so many times in the Spring, and how Toms and even other Jakes reacted to it. So we decided to go forward with the project, and only test in the fall (2017). The tests on the prototypes of this pair were insane and since they were in the Fall, that’s probably a good sign. I’m still always amazed at how turkeys still kick-in all their springtime tendencies during the Fall seasons when the situation causes it. We knew the final product needed to be super accurate in shape and color.

The colors we were confident in, because we now have our own in-house sprectrometer. We can constantly monitor our finish and comparing it to freshly-killed birds to match.

The shape of the Jake isn’t subtle; it’s not a slight variation of another pose. It’s crystal clear what’s going on and we probably could’ve got away with getting it fairly close. That doesn’t sound like fun though. One of my favorite things to do is collect a ton of reference of whatever pose, or animal, or fish, etc, then compare all the reference to see what each of the specimens all have in common, and what is unique to each individual. If I look at 20 spawning male chum salmon pictures, there will be a whole list of colors, or patterns that each fish has, but only a short list of traits each individual has. I watched tons of videos of turkeys knocking-it-out (don’t tell people about this please), and it’s amazing the consistency in the pose. North, South, East, West, wild or domestic, theyall arch and flex identically and even have an unbelievable consistency in loft of feathers, so I tried to nail-down and accurately duplicate the unique template.

The hen’s posture was much more subtle, and really is a variation of another pose. The differences between a submissive hen (a hen willing to be mounted), and a mating hen (a hen with the weight of a gobbler on top of her) seem subtle to humans, but definitely signify a different message in the bird world. The mating hen’s wings are splayed-out and her head is raised and slightly cocked.  The other major difference in the two hen decoys is that the Mating Hen has all the tracks and holes need to be rigged with her partner-in-porn, the Mating Motion Jake.

Here’s something to be sure to do: if youhave a Submissive Hen already, set her near the Mating Motion Pair to look like another hen that’s waiting and willing to be mounted by the Jake. This adds to the effect and urgency.  Also keep in mind the motion doesn’t need to be super aggressive. Turkeys are of course fantastic at distinguishing colors, but they are also amazing at picking up the slightest motion. Remember the idea is to simulate a Jake that’s just trying to maintain his balance and force the hen to raise her tail- nothing more.

Finally, don’t be afraid to put the decoys close to you. For archery, we routinely set decoys at 6 yards with a blind, and 12 or so without a blind. Even for shotgun hunting, it’s always inside of 20 yards, for fun and for quick, clean kills. We even purposely made the pull cord somewhat short because of all the shotgun hunters we see, putting their decoys out at 35 yards and missing out on the super fun, close interactions. Of course ,do whatever brings you the most joy!

Please send us your pictures and videos of your experiences with the Motion Pair. Thank you so much for your support of DSD and for supporting USA manufacturing jobs; such a RARE commodity in the decoy business, but YOU make it possible! All of us at DSD thank you and wish you great hunting.