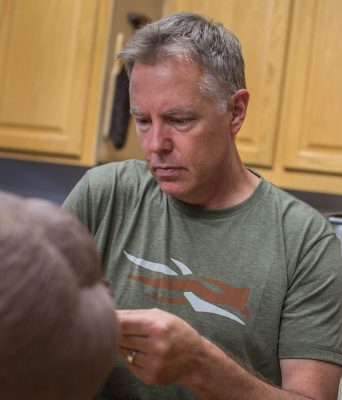 At the Oregon Waterfowl Festival this year, DSD donated some of our new Giant Canadas for their fund-raising auction. The auctioneer called me up to tell the crowd about the new version of our old honker. Anyone who knows me knows how fond I am of speaking in front of crowds. Yes, that’s sarcasm. Here is a short list of things I’d rather do than speak in front of people:

1. Pull each of my toenails off with a pair of rusty pliers

2. Light myself on fire, and put the flames out……with a rasp.

3. Attend an international soccer match naked and accompanied by a cobra and a rabid warthog (I don’t mind the animals, or even the naked part).

4. Crab-crawl through a mile of broken glass to have a vegan lunch with Nancy Pelosi.

Anyway, I got through it; I survived. When I get nervous, and have a microphone, I tend to clutch it with two hands and start beat-boxing. I managed to fight-off that temptation this time. The last time, Chad Belding called me out in front of a huge crowd for a beatbox beat-down.  I decided it was a good idea to participate. I lost.

But this time God was with me and I told the crowd how the Giant Canada came about.

When we came out with our new one-piece honker, we didn’t know if there would still be a demand for our original honker. People were ordering the new One-Piece Honkers faster than we could make them. This gave us flashbacks of just a short time ago when we got so far behind; our customers were ready to form an angry mob. But now, with our new building in place and more preparedness and efficiency, we are not in nearly the pickle we once were in. As it turns-out, there is a dedicated following to the original honker. There are people that LOVE the size of it, and many that love the clean, fine details. There is also a list of things people didn’t like about it, and we decided to set about changing those things.

The first thing we did was to permanently attach the head. This made it into a one-piece decoy. You can imagine how awkward that was. Here is our old “honker”, made into a one-piece decoy, when we just came out with a decoy that we called our “one-piece honker”. It was like having two sons, each named Kyle. No, way worse than that; like two sons, each named Ryker, or Skyler, or Adler- YIKES! So we settled on “Giant” (the largest sub-species of white-cheeked geese, for anyone just arriving to earth).  Our “One-Piece Honker” goes by “Honker” now (we’re not going any shorter; please don’t ask if we have any “honks” in stock (or “ho’s”).